The representatives of OLTIS Group took part in the event from the series “Lunch s Kurierem”, whose main topic was “Modernisation and maintenance of railway infrastructure for the army”. Among the invited guests were representatives of the Polish Ministry of National Defence, PKP PLK and military universities.

The following topics were discussed during the meeting
– investment in the maintenance of the key railway infrastructure related to defence needs
– standards of modernisation works
– military siding – modernisation, commercial benefit

Colonel Slawomir Lazarek, the commander od the Office for the transport and movement of troops  and maintenance of railway military infrastructure, presented a contribution to the topic of military siding. The presentation done by Radim Kuděla, the representative of OLTIS Group, was devoted to the issues related to military transportation in the Czech Republic and to the holding’s experience with the development of information systems for the military. Mr. Kuděla introduced mainly the information systems such as Scheme Book for military transportations and systems for monitoring of military and special transports.

The meeting was held on August 27, 2014 in Warsaw. The organizer of the event was the magazine “Kurier kolejowy”. 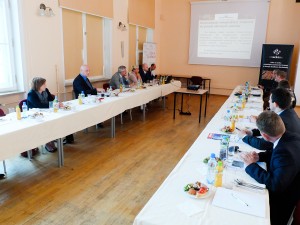