This year the annual awards ACRI were as usual given after the Žofín Forum that was devoted to current problems of Czech and European railways. One of the awarded companies was also OLTIS Group, which received the prize in the category Event of the Year for the successful organization of the conference IRFC 2013 (International Rail Freight Conference).

This event significantly contributed to the strengthening of cooperation and development of railway industry and was absolutely unique due to the importance and participation of the top representatives of major international railway organizations and railway companies. One of the side events of the conference was the Eurasian railway forum, attended also by the president of Russian Railways Vladimir Yakunin and top representatives of European railway associations UIC, UNIFE or CER.

The ACRI annual prizes are awarded for new products, innovative solutions or extraordinary events. In the course of the seven years of the existence of the annual ACRI awards, many Czech companies from the railway industry became proud holders of the prize. According to Marie Vopálenská, one of the purposes of the awards is the support of Czech railway industry with more than 200 years of tradition, which recently went through a though and complex process of revitalization and once again became an important part of the Czech economy.

ACRI awards this prestigious prize under the auspices of the Ministry of Transport and the Ministry of Industry and Trade of the Czech Republic. Partners are Czech Railways, The Railway Infrastructure Administration, ČD Cargo, Export Guarantee and Insurance Corporation; the Media partners are Dopravní noviny, Železničář, ČD pro vás and economics-technical revue Doprava. 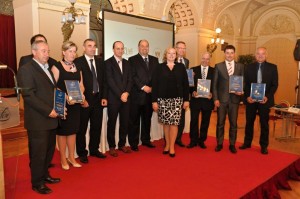 The review of winners in individual categories:

Person of the Year
Ing. Danuše Marusičová (ACRI) – for the contribution to technical normalization