On 19 October 2015, OLTIS Group finished the implementation of new generation of Information System of Operations Management (ISOŘ), which is a key tool of Správa železniční dopravní cesty, s.o. (SŽDC, Railway Infrastructure Administration) dispatch workplaces for organization and operation of rail transport on the whole SŽDC line.

The new generation of ISOŘ brings a significant enlargement of functionality, especially in following areas:

Development of new ISOŘ generation has been carried out in 2013–2015 within the project „Implementation TSI-TAF into SŽDC information systems, phase 2“ co-financed by the Operation program Transport of the Ministry of Transport, Czech Republic. 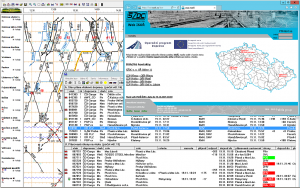 Presentation of OLTIS Group project solutions at IT-TRANS in Germany

The OLTIS Group will participate at the Job Fair – kariéra+

Survey for the international project IP4MaaS

On the subject of railway and intermodal transport in Wisła