The 25th UNIFE General Assembly, the Association of the European Rail Industry, was held over 22 – 24 June 2016 in Amsterdam. Within this event, additionally 11 companies were admitted as a new member of UNIFE.

The OLTIS Group Company, as a member of UNIFE since 2009, was represented by Mr. Miroslav Fukan, Mr. Petr Kroča and Mr. Jiří Čáp. Besides General Assembly, they attended a plenary session and took part in a meeting of working and executive committees. Mr. Miroslav Fukan actively participated in the Presiding Board and SME Committee meeting. Mr. Petr Kroča represented the OLTIS Group Company in the Digitalisation Platform and Communications Committee. Mr. Jiří Čáp represented the OLTIS Group Company at the Freight Committee where the trainings and discussions relating to the ERIFA position document were organized. This document should provide basis for the European Commission in terms of the rail freight development.

Mr. Miroslav Fukan, Executive Director of the OLTIS Group Company, as one of the panellists actively participated within the panel discussion concerning the EU Rail Industry Competitiveness and Market Leadership (public procurements, trade, research and development) within the framework of the General Assembly Day. The following speakers took part in this session as well: 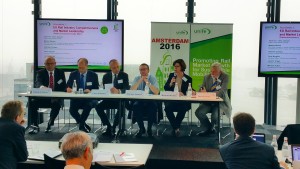